Friends are good objects of comparative analysis. If you've had the opportunity to get to know people from as many levels of social and economical status you will come to the conclusion that happiness is subjective to each person, regardless of how much acknowledgement or money they have.

For example, we all know this typical prince and princesses who don't have to lift a finger their whole life and live off daddy's money (pardon my poor stereotyping and bless them for their good hearts). Who lunches amongst those with designer handbags and pursue to maintain their standar of living. We also know those who grew up in slums with tough characters and drive to success who pull themselves out of their situation with hardwork and perseverance.

Let us drink the goodwill of his comments and start the argument from here on with the best of intentions and as little judging as possible (tee-hee).

I had the chance to make my own money, and sadly be cut off allowance, since I was 21. My goal, at that moment, was to save as much money as I could, invest it and live off the interest so that I could really save the money I made (sick as it is, that is actually what I used to do) thus being able to one day own a house and car. In a nutshell, making money made me happy. I could buy things without having to consent to anyone, make my own budgeting, plan my own investment methods. All was nice and simple.

But then life has its twists and I married my bestfriend instead, left right after to get my early Masters Degree. It was then on had I learned that money means nothing...

At first all we did was fight about budgeting because both of us were used to our own way. I realised that mostly the problem was in me, because I still couldn't control my ego and let go of what used to be 'mine'. I learned the hard way that, for me, investing in my relationship is 'more profitable' than investing in my savings account. Perhaps more that nothing is actually ours so its most beneficial to plan carefully where you want to allocate the temporary fundings you have now in order to bring back the best return in the future. May it be friends, family, a house, a vacation - it all heads to one target: happiness or what we perceive it to be.

The argument for my choice is that money is nominal. Humans have the nature to be unsatisfied and want more. Once you reach 1 you will strive for 2, reached 2 strive for 3 and so forth. In terms of money, with it being nominal, the rationale is perhaps: nothing will ever be enough. You could be the richest person in the world and you would still be thinking of how to make more money and buy more things. You could say now that the only thing you want is a house or your own car or to afford a baby-sitter, but tomorrow when those are fulfilled you would naturally move to the tertiary level and subscribe to sattelite TV or save up for a media room.

You would never be satistfied.

At this point of my train of thoughts, I decided that it is best to just take a deep breath and be thankful of what you have. Sometimes the things you want distort you from appreciating the things you already have. It is then when you disregard how fortunate you actually are that they slip away. Perhaps logically, it was because you weren't paying attention to them hard enough.

Of course having targets is mandatory or else we will be the same person for the rest of our lives. Growing, through any means, I argue, is the basic motivation to living. But it's one thing to want too much and lose what you already have. Perhaps in my case, wanting security and losing satisfaction.

To think that all of this pondering I am doing came up by simply overhearing Richard Ashcroft singing:

There you go.
Posted by Inaya Rakhmani at 6:35 pm No comments:

You might realise the change of address or I might be too self-involved to assume so but yes, Arya and I just moved to a new apartment. Long story short, it was then, during the period of not knowing where to live when we had to move within 2 weeks and not knowing if Arya could stay in the Netherlands considering the long bureaucratic procedures of residence permit, when I realised that Arya is the person for me and I for him.

In the beginning of our relationship I was the person constantly reminding him how, in life, we have to have targets - it turned out this is not what I need in a partner.

Perhaps I am over-generalising by arguing that most of my friends who are well-oriented and fast-paced are pretty much the opposite of street smart. They know how to be this month's employee but don't know how to fix a leaking sink or calculate the most efficient way to arrange boxes when moving. When I am cleaning, Arya is the type of person that would stand up and do something too. Not always, but he realises the neccessity to appreciate other people's effort, especially his partner's. He doesn't see me 'only' as a wife but he sees me as a partner, who is able and at the same time is entitled of appreciation.

If I had to choose between being 'target-smart' and 'street-smart' as a quality necessary in a partner, I would choose the latter. Perhaps because I am not so or for some other reason. But the bottomline for me is, you could work on your life target together with your partner but you can't teach them how to empathise without them being raised to appreciate other people.

For that, I thank Arya's parents for raising him as the self-sufficient rational smart-ass he is. Kudos to Mr. & Mrs. Toekan.

When I whine about something, he is the type of person who would shrug my unnecessary bickering off. He would remind me that I am being ungrateful instead of nurse my feelings. For someone who strives to become independent and strong, this is the way to go.

I suppose it really depends on what kind of person you want to become and finding the right person to cooperate with you in order to become the couple you see yourself part of. I am glad we had the opportunity to be given 'tough love' here and prove how good we can cooperate under immense pressure. Sure we have our quarrels but when the going gets tough, the tough in us really gets going. 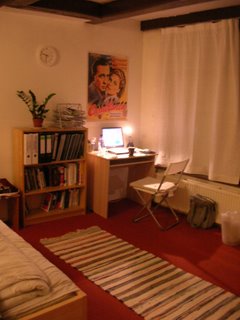 Posted by Inaya Rakhmani at 6:31 pm No comments:

I was biking home with Arya after doing our groceries one day when my mind drifted off...

Should the supermarket be point A and our house point B, there are 2 possible routes to take - let's call the first route X and the second Y. If Arya takes route X and I route Y, who will arrive first?

Mathematically, you can calculate the actual distance of the two routes, the margin of Arya and my biking speed, the weight we were carrying at the moment (assuming the more grocery weight we carry, the slower we bike), our muscle volume and, perhaps, wind power (please alert me if there are other definite variables). I just found it interesting that these variables are calculable and by contemplating them we can estimate who will arrive first to point B.

Then again, there's always the unexpected factor. It might rain, a pigeon might be crossing the road and we have to hit the brakes a bit, we might get muscle spasm, etc. And this unexpected factor is undeterminable.

Deduction: nothing is predictable. Even when you may estimate and possess the means to estimate, it is never absolute.

I began to think about relationships and how when we get to know our partner, we assume 'they know how we think and what we think'. In a quarrel, we often argue with: "Ya kamu kan kenal aku..." atau "Ya kamu kan tau aku kan orangnya emang gitu.."

We assume that they know and this becomes our motivation to, well, just be pissed. Theoretically, communication can be perceived as going from point A to point B. Even when dealing with calculable variables, there is always an unpredictable factor that might screw up the whole estimation. Apalagi with something as relative as perception.

Never delude yourself by being so sure that our partner knows us thus deliberately is hurting us by still doing the thing they know we hate. Perception is relative by itself, not to mention considering the possibility of unpredictability. Perhaps on that specific day of the fight, he/she has been obsessing about something else and not being able to focus, or they had a bad day that influences their better judgement, perhaps they were overworked that day.. The possibility goes on.

Sometimes it's as simple as this: If you want to be understood, try to understand first. If you want to be listened to, listen first. Nothing is absolute except relativity. To take that for granted is to mislead your own pattern of thinking.

Am I making any sense?

After all in terms of relationship, at the end of the day, we just want to go from point A to point B, regardless of the different routes we might choose.
Posted by Inaya Rakhmani at 6:30 pm No comments:

People have such different concepts of happiness, assuming this is the point of living. Family. Spouses. Parties. Designer goods. Education. Career. Knowledge. Newest gadgets. The list goes on.

Some of the things I mentioned perhaps struck a key; just by reading it. Some of them might seem unimportant to you. It is our framework in life which decides which is important and which is not. Makes you think doesn't it?

I began to think about business and the principle of investment. The basic idea is that you should put your money (resources) into a sector which you have valuable data (experience) to predict return and, preferably, profit.

Should happiness be as simple as that? Is it a determinant factor that what you give, should return to you, preferably more?

Or is it the selfless idea that you should find love in every aspect in your life that it becomes infinitive thus no matter what you lose or how many times you fail, you can always bounce back up again and continue a stronger human being.

How do you search such love? How do you find it? Is it in the things you perceive important? The things that struck a key. Is it really there?
Posted by Inaya Rakhmani at 6:15 pm No comments:

What you think is best is not always so
Take a chance and prove it's worthwhile
Posted by Inaya Rakhmani at 6:13 pm No comments: