Yesterday was my son's, Malik, Kindergarten orientation day. As the teachers were presenting the semester outline to the parents, the children who were there started doing their own thing (like five year olds usually do). Malik's class mate Aisha (pseudonym) began drawing.

She had really clear strokes and was very detailed. She described to me that she was at her house. "Look at the roof!" she pointed to the lines of stacked roof tiles she drew one by one. Malik asked for a paper and pen as well. They began drawing next to each other. 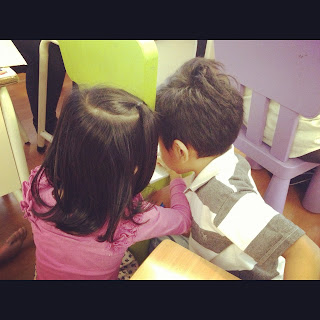 Malik's drawings, as he often does at home, were explosive. There's a scenario that involves explosions and fire and fire engines spraying water to tend the damage. As usual, his hands moved as fast as his words. Aisha began looking at his drawing and asking questions.

They talked to each other quite seriously and inaudibly, then Malik gave her the pen, "Would you like to draw?". With Aisha's detailed strokes on the paper, Malik's explosive drawing turned into something else. She drew a flower and a person and fishes in a pond. She returned the pen, Malik took it, they talked about what to draw next. They exchanged the pen for quite a while, equally, without guidance.

I was taken aback as I witnessed how these two young people collaborated so nicely. Neither was dominant in deciding what the drawing would be about, neither raised their voices, neither tried to outdo the other. They were just enjoying creating something else. 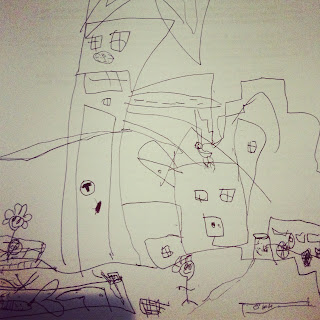 You would think I was romanticising children, I'm not. I have also witnessed children, including my own son, try to manipulate each other into lending them a toy or playing something they prefer. They are just as capable of complex emotions as adults. But this one moment, I was lucky enough to see something else.

They weren't guided by 'what one is supposed to do' because it's 'the right thing', 'berpahala', or anything moral. It simply felt natural to them. One thing that I rarely see in adults (and increasingly so of late).

There's usually an interest, an assessment, some variation of mild to extreme power play that would make us naive if we don't at least try to understand. And, if we're lucky enough, remember that understanding comes with subjectivity.

So I would just like to cherish this, and share, how these moments surround us. And if we walk slower and pause, seemingly mundane things can take our breath away. Kind of reminds us that it is the mundane, at times, that matter. The meaning we seek so rigorously outside, is not so far out of reach.